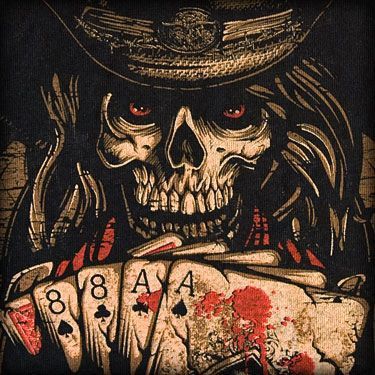 Red-eyed from lack of sleep, Wild Bill looked around the table at the other players. They were all waiting for him. They had shown their cards, now it was time for him to show his.

He smiled, not much, just enough to show the upper row of crooked, rotted and tobacco stained teeth that filled his mouth and then turned away to spit in the direction of the bronze spittoon in the corner of the tent. He hit the target with a loud wet splat.

He looked around again at the cards already on the table and his smile grew. He had them all beat.

After a solid day of poker this was the last hand, for him at least. He had put his last nickel into the pot and was going to walk away with almost a hundred dollars. He was pleased.

Bill felt the impatience of his fellow gamblers as he turned over the cars one at a time, an impatience that quickly turned to disappointment and anger as he revealed his hand. Ace of clubs, eight of clubs, eight of spades, ace of spades – two pair, a winning hand. He paused to let the fact that he had won sink in and then he reached out to turn over his hole card, his hand froze half way there though as it no longer responded to the instructions from his brain.

The last thing Wild Bill Hickok, one of the most feared gunmen in the American west, saw was his own blood as it crept across the table to cover his final hand. Aces and eights, the hand that would forever be known as a ‘Dead man’s hand.’

What is considered the dead man’s hand card combination of today gets its notoriety from a legend that it was the five-card stud hand held by James Butler Hickok (better known as “Wild Bill” Hickok) when he was shot in the back of the head by Jack McCall on August 2, 1876, in Nuttal & Mann’s Saloon at Deadwood, Dakota Territory. Reportedly, Hickok’s final hand included the aces and eights of both black suits. (source wikipedia – https://en.wikipedia.org/wiki/Dead_man%27s_hand )