Killashandra thought her world had ended when she was told she would never become a concert singer.And then she met the stranger from off-world.

He said he was a Crystal Singer – one of the unique ones of the Galaxy – and when Killashandra tried to find out what a Crystal Singer was the answers were vague, obscure.All she could discover was that they were special people, shrouded in mystery, and danger, and beauty – and something altogether incomprehensible.

It was then that she decided that she too must try and become a Crystal Singer.

One of the things I like best about McCaffrey’s writing is how she is able to create new worlds that fit within the universe she has already established without seeming out of place. There is only the occasional mention of things from the rest of the universe, the focus is all on the Crystal Singers and their world, but there’s enough there to know that so many of the different books are connected, even if only distantly.

The first two thirds of the book are better than the last; Killashandra Ree is a very good character, well-written and interesting and McCaffrey really lets you get to know her, and the world she joins, full of danger though it is, has an appeal to it. The secondary characters are decent but not quite as well fleshed out as Killashandra, which makes them harder to connect with.

When she has to go off-planet for a contract, though, I begin to lose interest. It’s still well-written, but I just don’t find this part of the book to be as interesting.

If you like quality sci-fi with a well-developed world, then you should check this book out, and its sequels.

Nimisha Boynton-Rondymense was the body-heir of Lady Rezalla and, as such, was the heiress of one of the First Families on Vega III. But even as a child she eschewed the formalities of her aristocratic background and was happiest in her father’s shipyard. By the time she was in her twenties she was the designer of the most advanced space yacht in the galaxy, and was owner of the Rondymense shipyards. 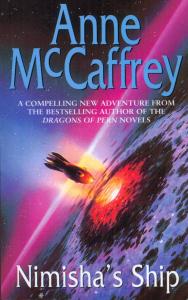 It was on a test of her Mark 5 prototype that things went wrong. In an empty space field, suitable for test runs, she was suddenly confronted with the boiling white pout of a wormhole, was sucked in, only to be thrown out into an unknown dimension of space. She was not the first. As she explored this new, unfamiliar section of the universe she found traces of ships that had been marooned over many centuries.

Not knowing if she would ever return to the world she knew, Nimisha chose to land on ‘Erewhon’ – fascinating, terrifying, beautiful and frightening – and inhabited not only by three survivors of a previous Vegan ship but by something else…

This has long been one of my favourite sci-fi books, and I still enjoy it whenever I pick it up for a fresh read, but my tastes have changed over the years and I now wish it was written in a harder style. The story is decently written and accessible, with no complicated technological terms to confuse the reader, and likeable characters, especially  Nimisha herself; in addition to that there’s some nice, if not extensive, descriptive detail and the aliens are nicely imagined.

I do find that the situations are coped with a little too easily at times, which takes away any real sense of struggle or danger, and that’s a shame. Even the attacks connected to the fight over Nimisha’s inheritance are treated too casually, and at the end of the book there’s no resolution to that situation, it just seems to be forgotten about.

Don’t get me wrong, this is an enjoyable book, but only if your preference is for a lighter read. This same story in the hands of someone who writes heavier, more in-depth, sci-fi could have been absolutely fabulous. That said, I still look forward to reading it again.

Today’s review is for Dragonsdawn by Anne McCaffrey. This is the story of how humans came to the planet of Pern and how the dragons that protect them came to be.

A group of humans, desperate to escape the technological and technocratic society they live in, not to mention a recent war that ravaged their planets, travel to the planet Pern on the edge of known space to make a new start and build a civilization that relies less on technology and more on humanity. 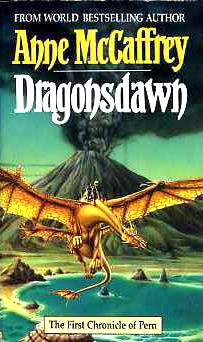 To begin with everything goes well, with only minor hiccups along the way to them achieving their goal, but several years after landing and starting their colony disaster strikes; without warning they are subjected to a mysterious rain, a rain that eats everything carbon based it touches, a rain that falls again and again.

There is no escape, the ships that brought them can’t take them away again, they must stay and defend themselves, and so begins a project to alter the native flying lizards and develop a self-reproducing means of surviving – the dragons of Pern.

This is a great novel with some wonderful characters, people I really care about. It doesn’t go into as much detail as it could about the mechanics of establishing a colony on a far off planet, but that’s good because it focuses instead on the characters, how they interact with one another and their new home, the joy of discovery and the pleasure of living a better life. In the second half the story changes as the colony has to fight for survival.

Anne McCaffrey does a great job of bringing out the best and worst of people as they react to the threat, and I can’t help thinking that what she describes must have been influenced in part by the way Great Britain faced the blitz during WW2.

Overall the best thing I can say about this book is that even after repeated readings I still tear up at the death of one of the main characters. To me that’s the sign of a great writer.